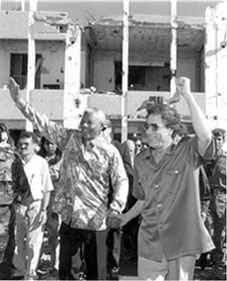 WASHINGTON-"I cringed when I saw Nelson Mandela embrace (Libyan leader Muammar) Qadhafi," Andy Young, former U.S. Ambassador to the United Nations, told the audience of 2,000-including First Lady Hillary Rodham Clinton-which fell silent when he broached the sensitive subject at a banquet for Africare on Oct. 23.

Mr. Young, emcee of the glitzy fund-raising dinner honoring Dr. Dorothy Height, president of the National Council of Negro Women, at first seemed to echo official U.S. anger over the visit that week in Tripoli by Africa's most popular president with the

Continuing, Mr. Young said he then realized that President Mandela's action-like his leadership of the now-Black-majority-ruled South Africa to reconcile its differences with many officials of the brutal white-minority apartheid governments of the past-"maybe is challenging us (in America) to reconcile with those Arab leaders with whom we have had conflict."

"We are reminded of the spirit of (the late Bishop of the Washington National Cathedral) John Walker, as expressed by the continuing life of Nelson Mandela and Dorothy Height, that one of these days we're going to all have to learn to live together, because ain't nobody here going anywhere," he concluded as a tide of applause swept over the room. "It is interesting to hear that Andy would refer to the spirit of tolerance," Dr. Acklyn Lynch, professor of history at the University of Maryland at Baltimore, told The Final Call. "Tolerance was what was discussed on the Day of Atonement and Reconciliation. Tolerance was used in terms of (the Honorable Louis) Farrakhan's trip to Africa. It is interesting to use tolerance (now) in terms of foreign policy."

Ignoring U.S. objections, and punishing United Nations sanctions against air-travel, Mr. Mandela traveled 100 miles by car from the Tunisian border town of Ras Adjir to the Libyan capital for an official visit Oct. 22. His 50-vehicle convoy passed under a series of welcoming banners, including one that read: "Mandela's visit to Libya is a devastating blow to America," according to published reports.

After a triumphant motorcade through downtown Tripoli, where he was greeted by thousands of Libyans chanting: "Mandela! Mandela!" and where children showered him with rose petals, President Mandela greeted Brother Qadhafi, outside the bombed home of the Libyan leader in which his daughter Hana was killed in a U.S. raid more than 10 years ago. With a hug and a kiss on each cheek, President Mandela's greeting was: "My brother leader, my brother leader. How nice to see you."

"It is our duty to give support to the brother leader," Mr. Mandela said of Bro. Qadhafi in comments broadcast on Libyan television. "Especially in regards to the sanctions which are not hitting just him, they are hitting the ordinary masses of the people ... our African brothers and sisters."

The sanctions are aimed at forcing Libya to hand over for trial in a U.S. or British court, two suspects in the 1988 bombing of Pan Am flight 103 over Lockerbie, Scotland, that killed 270 persons.

During his visit, Mr. Mandela reiterated South Africa's policy, saying a way should be found to lift the sanctions. He said his country supports the Organization of African Unity's call for a trial for the two suspects in a neutral or third country.

Earlier, the Clinton administration stepped up its public criticism of Mr. Mandela's trip, saying it undermines the international sanctions insisted upon by this country. "We would be disappointed if there were a ratcheting up of the diplomatic contact with a government under sanctions," State Department spokesman James Rubin said before the trip.

"Those who object to my visiting Libya have no morals, and I will not join them because I have morals," Mr. Mandela was quoted as saying in the Arabic language Al-Hayat newspaper. "Qadhafi is my friend. He helped us at a time when we were alone. And the ones who are stopping us from coming here were helping our enemies at that time," Mr. Mandela was quoted as saying.

During Minister Louis Farrakhan's 1996 World Friendship Tour visit to Mr. Mandela's home, the principled African leader referred to Mr. Qadhafi as "my friend," when reporters questioned him about Min. Farrakhan's visits to Libya.

It is unlikely that U.S. anger will result in anything but a superficial strain in U.S.-South African ties, however, most analysts agreed. "If President Clinton is going to Africa next year," as is widely reported that he will do, Prof. Lynch said, "President Clinton can't go to Africa and not go to South Africa.

For his part, Prof. Lynch pointed out, President Mandela has been consistent in his relations with nations-including Libya, China, and Cuba, all so-called "pariah states" in the American view-which befriended the South African liberation struggle.

Representatives of those countries and others which the U.S. and other Western powers disapproved of, were all welcome at Mr. Mandela's inauguration in 1994.

"Our relations with Brother Mandela and the brothers of South Africa during their struggle is not a new one. Our relation has been (since) a long time ago, and we are proud to say that we helped them and assisted them. This is why the United States and some western countries call Libya helping terrorism. For them, liberation is terrorism," said Ambassador Mohamed A. Azwai of Libya's Permanent Mission at the United Nations. "Maybe because so many other countries agreed (with the U.S. position on Libya), they thought that everybody would agree, but Mandela is not as the others. He is like Farrakhan, he is like a Jesse, who does not accept instructions from anyone-except what he believes (is good for) the interests of his people and his country," the Libyan ambassador added.

Dr. Ephriam Isaac, director of Institute of Semetic Studies, Princeton, N.J., argued that the Mandela visit could help forge a needed dialogue. "I'm a person who is involved in peace making. We should not foreclose the option of dialogue. I think making dialogue and finding ways to make peace, will help all of us as human beings," he said. "I think you are very charitable to the U.S. policy," Dr. M.T. Mehdi, president of the American-Arab Relations Committee told The Final Call, when asked if racism might account for the U.S. reaction to Mr. Mandela's visit. "It is indeed a bit of racism, or stupidity, this double standard, American policy.

"Naturally, President Mandela is the head of his government, he has the right to visit whoever he wants to, just as President Clinton has that right. But for the American president to advise the African leader not to visit another African leader is an interference, is unbecoming, it is racism, in the ugliest form," said Dr. Mehdi.

Find Out More About Libya